What type of breakfast person are you?

New research has identified five breakfast personalities among the national population in findings that could promote healthier food choices in the Australian diet.

IPAN researchers analysed data from the 2011-2012 National Nutrition and Physical Activity Survey and found what people eat for breakfast is broadly categorised by gender, age and socio-economic factors.

“The cooked breakfast of eggs, bacon, sausages and vegetables was the least commonly eaten breakfast, accounting for only 11 per cent of all breakfast and eaten mostly on weekends or later in the morning,” Dr Leech said.

“Not surprisingly, tea or coffee topped the list as the most popular breakfast beverage choice in Australia.”

“Breakfast is often a meal we eat out of habit and making small changes to the food we eat at breakfast can make a big difference to the nutritional quality of our diet overall. These small changes are achievable because they don’t require many cooking skills,” Dr Leech said.

“For example, older Australians who prefer breads and spreads at breakfast could be encouraged to add protein-rich foods, such as eggs or reduced salt baked beans, as part of broader strategies to promote healthy ageing.

“Other simple changes to food choices include replacing refined-grain cereals or breads with wholegrain varieties, processed meats with unprocessed meats, adding tomato or avocado to quality proteins such as eggs or adding nuts, seeds, fruit or yoghurts to cereals are examples where breakfast quality could be improved.

“People who eat wholegrain high-fibre cereals and milk for breakfast had the healthiest weight profiles and breakfast consumption was also linked to other lifestyle factors that may play a role in weight management.

“Whilst a causal link between breakfast type and weight gain remains to be established, choosing wholegrain cereals and breads at breakfast could help Australians meet their daily fibre requirements and reduce their risk of certain health conditions including diabetes, bowel cancer and heart disease.

“Fibre intakes can easily be increased by including a slice of wholemeal or grain rich bread topped with beans, mushrooms and spinach, or half a cup of cooked porridge or other wholegrain cereal, and some fruit as part of your regular breakfast.”

Heart Foundation Food and Nutrition advisor, Sian Armstrong, said the research highlighted the importance of breakfast as an opportunity to choose heart-healthy foods.

‘Breakfast options include vegetables such as mushrooms, spinach and tomato, bananas, berries and other fruit, oats and wholegrain toast and healthy proteins including beans and eggs. Choose healthy fats such as avocado and nut butters, as well as unflavoured milk, yoghurt and cheese.”

This work was supported by a Postdoctoral Research Fellowship (ID102109) from the National Heart Foundation of Australia and a National Health and Medical Research Council (NHMRC) Emerging Leadership Fellowship L1 (APP1175250). The funders had no role in the study design, data analysis, interpretation of the data, or writing of the study. Views expressed in this article are those of Dr Leech and do not reflect the views of the NHMRC. 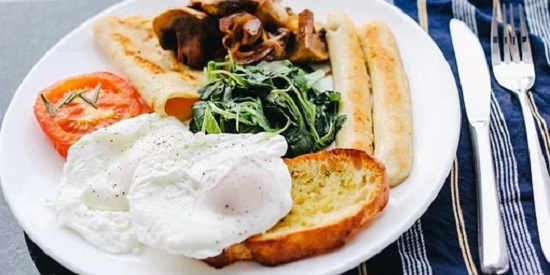 Study finds children missing out on healthy diets at childcare

Children in many Victorian childcare centres are being fed meals that don’t meet healthy guidelines and staff who plan their menus don’t feel confident or supported enough to do better, a new study has found.

Food and drinks are getting sweeter. Even if it’s not all sugar, it’s bad for our health

New IPAN research shows the amount of added sugars and non-nutritive sweeteners in packaged foods and drinks has grown a lot over the last decade, which is leading to a broad range of consequences, as our experts explain in The Conversation.

Eating an egg a day can help keep Vitamin D deficiencies at bay during the winter months, new IPAN research has shown.

Help us make a difference.